The Barrière  Deauville Polo Cup has its first two winners: the Ladies Polo Cup and the Silver Cup. Two gripping finals: superb horse-riding, magnificent horses and a beautiful sports show. And this festival of polo is far from over since as from tomorrow the Gold and the Bronze Cups will start playing.

Ladies Polo Cup
During this “ladies final”, all eyes were on the young 30 year-old professional player, Lía Salvo, handicap 9 and no.1 world lady player in the latest World Polo Tour ranking. Salvo is not an unknown name in Deauville because in 1974, the father and coach of Lía, Hector Salvo, won the mythical Gold Cup with the Cabaneros alongside the h10 player Hector Merlos. But a polo match is not won by just one player and if Lía was able to lift the ladies’ trophy last Saturday, it is thanks to the team that she built around her over the matches, motivating and raising the level of her amateur teammates: Margaux Perruchot and Marguerite Percheron, very present on the field as well as the young Adèle Renauldon, decisive in defense which did not prevent her from opening the score. There were some moments of nervousness when, at 4-2 in the fourth chukka, the opposing players of the Charlo team obtained a penalty but the French no.1 player, Caroline Anier failed to transform it. The relief was even more palpable when Marguerite Percheron scored a fifth goal for Brok Café.
This victory is also that of an Argentinian horse breeding farm run by Jorge Musso, in General Levalle, in the province of Cordoba: eight of the sixteen horses of the winning team came from there and were all trained by Dario, the son of Jorge Musso, handicap 6, former winner of the Gold Cup and who will play as from this week in the Bronze Cup. Three of the four players were riding horses from this horse breeding farm. But the “blanket” for the best horse was awarded that day to a thoroughbred, a racehorse retrained in another discipline. A process encouraged and organized by the Association “Beyond the racetracks” whose president, Elizabeth Doumen, handed the blanket to Catharos, a 10-year-old chestnut by Limnos that Adèle Renauldon had bought from a….. horse-ball player. A double successful retraining.
Silver Cup
The spectators will take away from the 2018 Silver Cup final, this Sunday afternoon, the incredible performance of the young Argentinian player Rufino Bensadon, who will be 17 at the end of the year and who scored in particular an extraordinary golazo, at a crazy speed, right out in the front and with everyone else behind him On the pitch, he enjoyed the irreplaceable father-son complicity with Pancho, h8 today, but a former h9 and semi-finalist in the Argentinian Open: “Rufino will move up to 5 in September and I will move down to 7, we’ll soon meet” jokes the father who is doing everything possible so that his son reaches the 10 handicap that his talent deserves. However, playing against them were heavy hitters including the “Argentinian Open” duo: Fran Elizalde – Tito Guinazu, a combined handicap of 15 between them.
The difference in the final score was narrow, 7-6, but it was clearly the “young” Rufino who allowed his captain, André Fabre, to win the trophy for the fifth time, a record for the Silver Cup.
There is no rider without a great horse, but also, no great horse without a great rider! And so it is (almost obviously) an Argentine mare, the impressive gray Lucifeta, ridden by Rufino Bensadon, who won the blanket for the best horse in the final.
Progression In The Wings: 2/1 – 4/3 – 5/4 – 6/5 – 7/6
Gold Cup
André Fabre and In The Wings have an opportunity to win the French Triple Crown, a trilogy that ends with the Chantilly Open de France on September 16 next. Before that, his team will have to win the Gold Cup which starts on Wednesday. That is by no means a foregone conclusion.
An even more competitive event with six teams playing: Talandracas, but also the team led by the president of the Deauville Polo Club, Jean-Edouard Mazery, Barrière (with Tito Guinazu and the spectacular Tete Storni). The Deauville public will naturally focus on the 100% French team led by Nicolas Desjouis, Outsiders, with the brothers Clément and Mathieu Delfosse alongside Patrick Paillol.
The Bronze Cup, with a lower level, will be played at the same time. It also  promises to be a great competition with five teams playing, mixing great Argentinian pros such as Dario Musso or Diego Braun with the best French players like the handicap 5 Patrick Paillol or the young player in the French team who will participate in the next European Championship in September, in Italy, Louis Jarrige.
Polo every day: one or two matches from tomorrow until the finals on August 25 (Bronze Cup) and August 26 (Gold Cup), with free entry on weekdays, € 10 on weekends and €20 for each of the finals
www.deauvillepoloclub.com 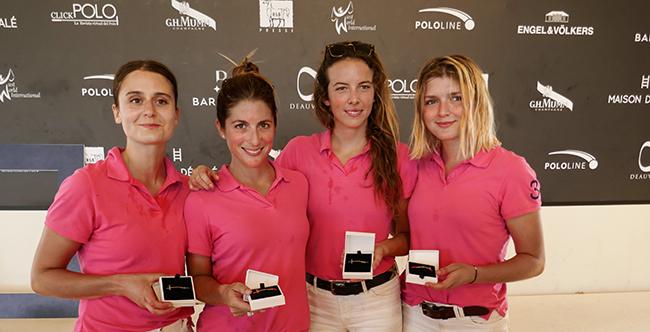