Monterosso 10 – 6 White Crane & Thai Polo 13 – 9 BP Polo
Monterosso confirmed their dominance in the league stages of the Cartier Queen’s Cup, the only team to remain unbeaten going into the weekend’s quarter-finals. Today they defeated Jasmine Calvert- Ansari’s White Crane (rec 2) 10-6 to put themselves at the top of League Three. Monterosso were in command of this game from the start and although Cubi Toccalino’s penalty taking was not quite as accurate as in previous matches he had still put his team ahead 5-2 at half-time. White Crane did not get themselves into this game until the fifth chukka, until then relying on their handicap advantage to give them a presence on the scoreboard. However in this penultimate chukka Nico Pieres converted two penalties, while James Harper and Andrew Blake Thomas fired through goals to take the score to 9-6 going into the final chukka. Suddenly White Crane, playing in their first Cartier Queen’s Cup competition were back in  contention. It quickly changed back to Monterosso in control in the sixth, with Alessandro Bazzoni finding the flags for his team to confirm their supremacy.
The other game today featured Thai Polo and BP Polo who were just playing for team honour. Both squads already knew that they had been knocked out of the tournament. Thai Polo were in command of this game from the first whistle, they were 7-5 up at half-time and continued to push until the final chukka. There were some flashes of brilliance from James Beh and his son Joevy for BP Polo and some tight marking from all the team in the third stopped Thai Polo from scoring. Juan Martin Nero offered a lifeline for BP Polo when converting a couple of penalties in the fourth, so that they were just a goal adrift  (8-7) going into the fifth. However a clutch of goals from Thai Polo in this chukka confirmed Thai’s dominance (12-8) and goals from Joevy Beh and Louis Hine in the sixth chukka was just an added kudos for both young players.
Penalty Shoot Out
At 5.30pm a penalty shoot out was held to confirm which teams would finish seventh and eighth in the league. It was a three-way contest between Alfredo Capella of UAE Polo ll, Barto Castagnola of Great Oaks LL and Nico Pieres of White Crane.  Capella had his eye in and won the penalty shoot-out, confirming UAE Polo ll as seventh place finishers. There was then a sudden death  situation which was won by Nico Pieres, confirming White Crane as the 8th team.
Cartier Queen’s Cup Quarter-Finals
Saturday 19 June
12noon   King Power v Scone Polo at Les Lions
3pm   Monterosso v White Crane at Guards Polo Club
Sunday 20 June
12noon   Murus Sanctus/La Magdeleine v UAE Polo Team at King Power
3pm   Park Place v UAE Polo ll at Guards Polo Club. The winner of this match will receive the Gerard Leigh Trophy 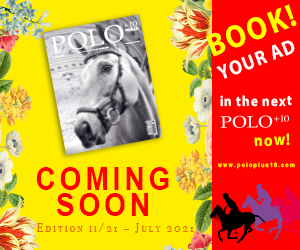