A fantastic Italian team triumphed in the final of the third edition of the U.S. Polo Assn. FIP Ladies European Polo Championship, at the Polo Club La Mimosa in Pogliano Milanese (Italy).

The Italians beat England 6.5-6, therefore also thanks to a 0.5 handicap advantage. In the final for third and fourth positions it was Ireland that beat Germany 5-3 in a penalty shootout after the match had been cancelled due to bad conditions following heavy rain that this morning obliged the Organising Committee to postpone the match for first and second place by an hour from 9 to 10 AM. England’s Heloise Wilson Smith won the prize for the best player in the championship.

For Italy this was the second European gold medal after winning the first edition in Chantilly in 2017 (winning silver in 2019 at Villa a Sesta, beaten by Germany in the final).

The Italian Ladies’ success follows by just a week the Italian Men’s Team win at the European Champions in Sotogrande, Spain. 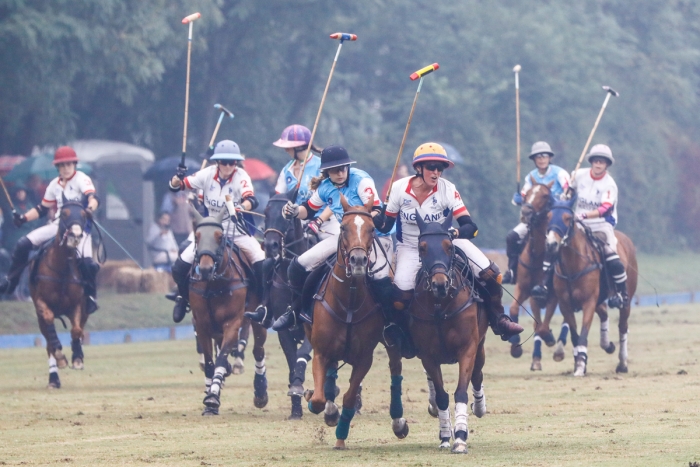 It was a very exciting final played on a field that held up in spite of the heavy rain that fell at La Mimosa earlier in the morning. England needed to come back after started off half a goal down and began strongly with Heloise Wilson Smith brilliantly exploiting a defensive indecision by the Italians early on in the game.

The host team reacted quickly, in particular with Camila Rossi scoring from 40 yards after a penalty and ending the first chukka 1-1. The English took the lead in the second chukka in which goals were scored first by Emma Tomlinson Wood, from 40 yards and then by Millie Hughes, who close to the goal posts managed to score off an amazing backhander played by Wilson Smith. In this fast-changing scenario Italy came back to 3-3 with two goals by Rossi, but it was England who was in the lead at the end of the fourth chukka on 4-3, following a penalty that Wood put through the goal posts. The Italians played a real leading role in a fifth chukka that will be remembered, with three goals scored by Rossi and the other rider of Italian origin Maitana Marré. England reacted strongly back at 6-4 for Italy scoring two more goals thanks to Wilson Smith and Hughes, but on 6-6 the team coached by Franco Piazza controlled their opponents last ditch attempts and won 6.5-6 thanks to handicapping.

“It has been a difficult week due to Costanza Marchiorello’s injury in the first match against England – said veteran player Ginevra Visconti, who had contributed to winning the gold medal in 2017 in Chantilly as well as silver in 2018 at Villa a Sesta – The girls however were all brilliant, from Camila Rossi to Alice Coria and Maitana Marré, and winning rewarded us for all the problems we have had to overcome. Obviously this win is dedicated to Costanza Marchiorello, who watched all the marches live from the clinic in which she is hospitalised after breaking her left malleolus.”

Alessandro Giachetti is responsible for the Italian Equestrian Sports Federation’s Polo Department: “These have been two rather intense weeks for us and we are immensely satisfied to have managed to win both European titles first with the Men’s Team and then with the Ladies. It sends an important signal for Italian polo, an additional stimulus to continue to work well especially with the young so as to ensure this sport becomes more popular.”

The federation’s coach Franco Piazza who also coached the Ladies after winning gold with the Men’s Team in Spain said, “These have been two difficult wins, especially for the Ladies after Marchiorello was injured. But they all played brilliantly especially in the final against England.”

IRELAND-GERMANY 5-3 The bronze medal was assigned resorting to a penalty shootout with two series of three shots. Ireland entrusted the job to Ina Lalor, Siobhan Herbst and April Kent, brilliant in avoiding any mistakes. Germany instead fielded Eva Bruhl, Hana Grill and Marie Haupt, getting off to a bad start with a miss by Bruhl and then surrendering when Grill too missed.

The championship played at La Mimosa Polo Club was the third edition of the FIP Ladies European Polo Championship.

The first was played in 2017 in Chantilly (France) and won by Italy with a team that beat France 5-3 in the final. The second edition was played in 2018 at Villa a Sesta (Italy) with Germany taking gold beating Italy 9-4.5.