The Ghantoot Racing & Polo Club (GRPC) are leaving no stone unturned as it prepares to host the 20th edition of the ‘HH President of the UAE Polo Cup’, one of the most highly anticipated, High handicap polo tournaments in the Middle East.

As many as six teams, comprising some of the best Emirati and international players, will be seen in action in the tournament. The ‘President of the UAE Cup’ offers a lucrative purse of AED 500,000. The first match will be played on Wednesday, March 11 with the final scheduled for March 27. The tournament will be held over a league format with the teams with the highest wins contesting the Grand Final.

All games will be held at the state-of-the-art Ghantoot Racing & Polo Club in Abu Dhabi which was founded by HH Sheikh Zayed Bin Sultan Al Nahyan and is run under the patronage and directives of his son, HH Sheikh Falah Bin Zayed Al Nahyan.

“The sport of polo in the UAE is going in the right way,” said HH Sheikh Falah in his address. “It is a historical occasion for Ghantoot Racing & Polo Club to celebrate the 20th Anniversary of HH President of the UAE Polo Cup. “We are extremely proud of what has been accomplished at our club and the way the sport of polo has been supported, organized and carried forward into the new decade,” he added. “Creating a legacy is critical to any sport and this landmark year for the HH President of the UAE Polo Cup is testimony to what can be achieved if we do this together. This speaks volumes for the sport’s future in the country.”

HE Zayed Alaboudi Al Zaabi, Ghantoot’s Executive Director, echoed HH Sheikh Falah’s view and said: “Since it was founded in 1994, the Ghantoot Racing & Poloc Club has invested into the successful model created by the late Sheikh Zayed bin Sultan Al Nahyan and which has been passionately carried forward by HH Sheikh Falah bin Zayed.

“Through their collective vision, the club has grown steadily from humble beginnings into a proud and permanent headquarters for top-level polo in the country,” added Al Zaabi. “It gives me great pleasure to announce that Ghantoot is all set to host the landmark 20th edition of the HH President of the UAE Polo Club at the magnificent Ghantoot Polo Club, which is the only Royal Polo Club in the UAE,” said Al Zaabi. “We can all look forward to two weeks of high-quality polo from some of the best exponents of the game in the UAE, together with some of the leading players from Argentina, and around the world. “I would like to take this opportunity to thank all our patrons, partners, sponsors and not least the fans for being with us over the past 20 years. “Good tuck to all the teams participating. I’m sure you will enjoy this just as much as well will watching you play.”

The 2019 edition of the HH President of the UAE Cup was won by Desert Palm who defeated the UAE Polo Team 10-8 in a thrilling final. Hosts Ghantoot Polo Team earned a consolation prize when they defeated Abu Dhabi Polo Team 9-8 in the sub-final. 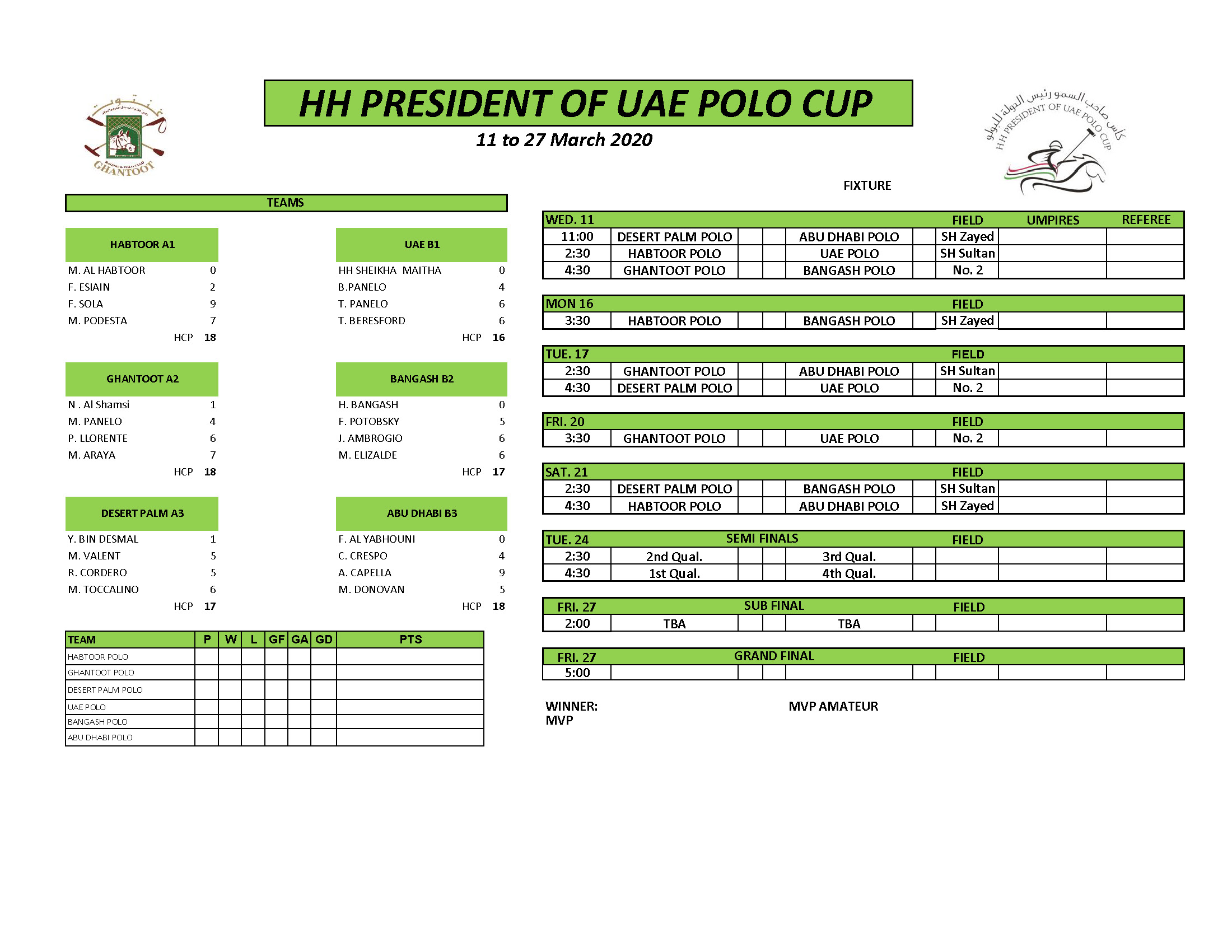