The French team Sainte Mesme was proclaimed this Sunday the winner of the Playtech Gold Cup, after beating the Pakistani team BN Polo Team 11 to 10 in the grand final of the 49th International Tournament MANSION Polo, held at the Santa Maria Polo Club in Sotogrande. This trophy is the most important of this sport event, one of the four most relevant in the polo universe. The vice-president of the Junta de Andalucía and Minister of Tourism, Juan Marín, and the mayor of San Roque, Juan Carlos Ruíz Boix, attended the event. In total, there were more than 30 days of intense competition with 10 teams at the highest level, which put San Roque (Cadiz) back in the center of world sport, and which brought together players from the United States, Argentina, the United Kingdom, France, Spain, Sweden, Ireland and Pakistan.

The match was up to the big finals, with maximum emotion until the last minute. Both teams gave everything to win the coveted title. Sainte Mesme, who played with his skipper Birger Strom, along with Robert Strom, Clemente Zavaleta and Salvador Jauretche, was ahead on the scoreboard throughout the match, but in the sixth chukker or period of play in which a polo match of this category is divided, BN Polo Team -a set integrated by Babar Nassem, Second F. Llorente, Pelayo Berazadi and Ezequiel Zubiaurre-, managed to tie at ten goals and it was necessary to play an extra time, in which the golden goal was decided, so much so that Robert Strom, from Sainte Mesme, scored.

Prior to the final, a triangular match was played, in which Mansion-LaLigaSports, Kazak and Los Schatzies faced each other in three matches of three chukkers each to decide the winner of the Subsidiary Cup, which finally fell to Kazak, a team made up of Sebastian Aguettant, Patrick P. Paillol, and Matthieu and Clement Delfosse.

And after the matches, trophies were awarded on the playing field.  Georgina Morello, Playtech Project Specialist & Welfare Officer, handed over the Playtech Gold Cup 14-goal handicap to Sainte Mesme, accompanied on the podium by the Vice-President of the Andalusian Government, Juan Marín, and the Mayor of San Roque, Juan Carlos Ruiz Boix. All of them were also in charge of delivering the individual trophies to the players of the finalist team, BN Polo Team.

Salvador Jauretche, from Sainte Mesme, was chosen as the best player of the final, a trophy given by Nuria Seguí, representing MANSION. And “Guerrera”, played by Robert Strom, received the prize sponsored by Hola! magazine for the best horse of the match, awarded by the president of the Santa María Polo Club, Antonio Ortiz.  For his part, Lorenzo Diez, president of the Real Club de Polo de Jerez de la Frontera, presented the Playech Subsidiaria Gold Cup to Kazak, accompanied by Nacho Domecq and Juan Maldonado, members of the board of directors of this institution.

The atmosphere of the big finals

The public could enjoy the afternoon from the stands, gardens and terraces of the Santa Maria Polo Club, where for this special summer the spaces have been rethought. To ensure safety and hygiene measures, the Club implemented a specific protocol with regulated distances and seating, limited spaces such as in the terraces and bars, as well as hydroalcoholic gel dispensers and a reminder of the mandatory use of masks.

The best sport was accompanied all afternoon by the best atmosphere. The numerous public enjoyed the exciting game, as well as the presentation of trophies on the playing field. And then it was time to enjoy in the gardens. The group Solera60 from Jerez offered a concert with versions of hits from the 60s and 70s, and the audience in the main pavilion enjoyed a tasting of Covap Alta Expresión Iberian products. In addition, those who were left behind could take advantage of the opportunity to do their last shopping in the Shopping Village shopping area, and to dine at sunset in the Gastro Garden restaurant area. With this final, the Santa María Polo Club gives the starting signal for the organization of the 2021 edition, in which the International Polo Tournament will celebrate its 50th anniversary, and will once again be sponsored by MANSION. 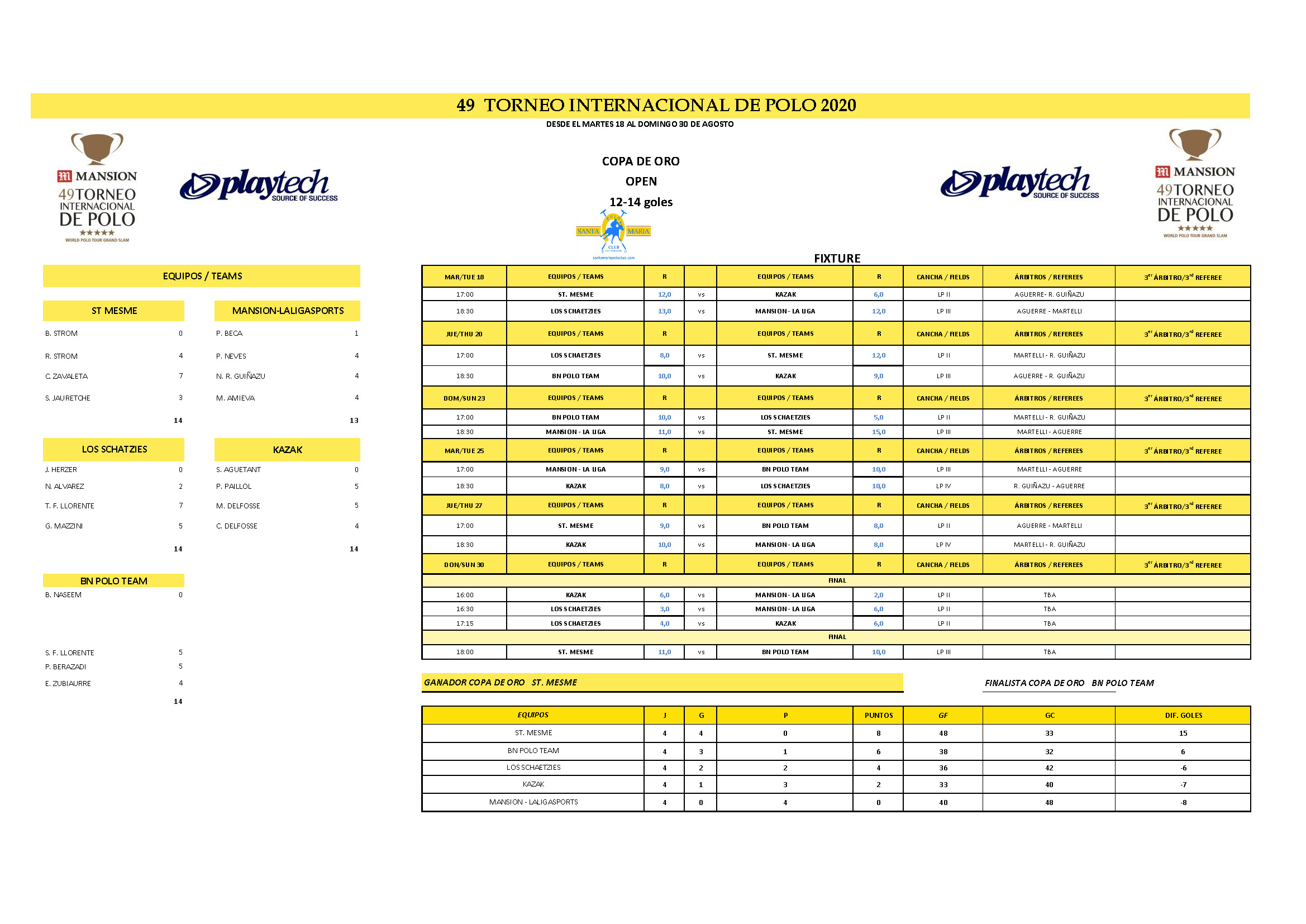